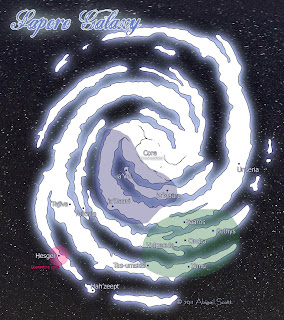 I was tired of not knowing where all my places were in relation to everywhere else, so I decided to map them out. (click to enlarge the image).

The pale green blob designates Coalition territory.
Vulpecula and Ondra are the two founding worlds; home to the Vuls and Ondrai respectively. Vulpecula is very earthlike, albeit more heavily forested, whereas Ondra has very large oceans and is quite marshy/swampy over a lot of its surface.

Cethys is a binary world, only one planet of which is occupied. The le'Trai and DuSkai (both colonising species) live here.

Xanu is the oceanic Xniki homeworld, and Zaaros, another temperate, earth-like planet, is home to the Zaar.

Tas-umskel is a recent addition (both "in world" and in my workings); I don't know a lot about the place yet. I've called it "dry and dusty" in one book, and the umskel 'speak' through touch as well as verbally, but that's about it.

Unseria, above and to the right, it a mysterious planet located considerably "above" the plane of the galaxy, and home to the unser. It's in the grip of an ice-age, and is mostly either ice-cap or taiga. The unser themselves are rumoured to be non-native.

Hah'zeept is a so-called "Rim World"; it is primarily desert, but colonists have done a fair amount of terraforming. For a far-flung world on the outer rim, it's a popular holiday resort.

Hesger is another Earth-like world, but has been ravaged by Hah'zeepti Haemorrhagic fever, and is under heavy quarantine. The pink circle designates the restricted area. It is also the planet of origin of the lepuuri and danata.

Tejiva and Telluvia are worlds owned by the Laima Salire; Tejiva is the laima homeworld, Telluvia is a "colony". Telluvia was originally inhabited by the ruta, however the laima accidentally brought a respiratory virus with them that killed a large proportion of the population. The majority of the remaining ruta are in slavery.

The pale blue blob is the Kiravai Imperium. Highly xenophobic, the kiravai are quite ruthless when it comes to keeping other "animals" (they do not consider other sentient creatures to be their equals, just animals) out of their territory. ia'Vai is their homeworld; ia'Maura and ia'Daavi are science colonies. (They have other colonies in this area - Sei lives on a colony-world - I just haven't decided on their names, or where they are.)
Posted by Abi Scott at 15:58