Blink, in her "honeybee" guise. Ohhh the puns, they kills me. XP

Disclaimer: Lance has no idea what honey is - or bees, for that matter - even though Whitesides tried to explain. Essentially, he knows honey = affectionate diminutive sometimes used by humans, and bee = small, busy insect, and felt like both were appropriate.

I'm reasonably pleased that she looks somewhat human, even though her anatomy is, ah, wonky? The wings are just me playing along with a theme.
Posted by Abi Scott at 08:04 No comments:

Just working on some little things. This is something I threw together which is sort of becoming this year's "theme", I suppose? Yellow and orange, hexagons, trees, old broken things, and so on. I'll try and come up with some sort of blurb for it eventually! XD
Posted by Abi Scott at 19:16 No comments:

Quickie drive-by arting as I have the desktop turned on for once. (Well, I had to, I needed to scan some things - this being one of them.) 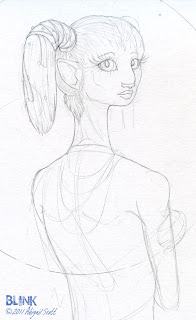 This is Blink/"Bee"; she's supposed to be looking back over her shoulder. She'll be dressed eventually (hopefully). XD
Ordinarily, she's a mechanical life form - not android-like, but about 14-15 feet tall and fairly obviously mechanical - but in order to save her life, Frond (a member of a species I am currently calling the GOK - aka "God Only Knows") had to change her into a biological creature. The GOK are essentially a species from a parallel universe where normal laws don't apply; she's not omnipotent, but still fairly powerful anyway. Saving Blink was Frond's last act before she died.

I'm going to upload a profile of the laima eventually; they're a digitigrade, three-gendered humanoid species descended from a small social omnivore that looks slightly like a fossa. (I never realised how HARD it was to design something with three genders that was biologically plausible. I thought designing a species with plausible hermaphrodites was hard enough. *bonks head on desk*)

I'm always planning on turning her back into her original self, eventually. I just haven't worked out HOW yet. I'm uploading this mainly because I really like how her face turned out.
Posted by Abi Scott at 22:29 No comments: