Click here to get to chapter 19 In which the Library discuss where Blink might have "sneaked away" to, and Blink finds that she's not precisely in the company of friends any more - although precisely how much trouble she is in, right now, hasn't quite sunk in yet.

Bit of a long chapter this time. (Almost 8000 words; I've been trying to keep to around 5000 for ease of reading, but I got carried away, haha. At least it's not like last time, where I divided a chapter because it was getting too long and it ended up 3 chapters.)

I've been playing around with a word-cloud generator. At lunch, I ran the reporter on our enquiry database, pulled all the titles of the enquiries we've done in the last 2 years, then punched it into the cloud generator, just to see what would happen.
I originally wanted to find a tutorial of some kind to explain how to do those pictures where you have a shape that is made up of lots of smaller shapes - where for instance, you have the silhouette of a person's face, but instead of just a flat solid fill, it's filled with flowers, but they don't overlap, and don't go off the edge, just get smaller and smaller to fill all the gaps. It looks like hard work, and I wondered if there was a shortcut. (I can't find an example, now, but it's close-ish to this)

...and I found this instead. I'm having lots of ideas, but I'm not sure how I can work it into my art, as like a background or an element or something.

Then, of course, I had to run my fiction through it. ¬_¬ You should be able to guess which is which. 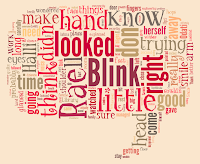 I seem to quite like the word "little", for some reason.
Posted by Abi Scott at 17:16 No comments:

I know. I haven't posted here for a while. I should confess, I haven't really had much TO post, as I'd been busy getting ready for NaNoWriMo in November, and battling a zombie desktop PC (...and then, of course, WRITING said NaNo.)

I planned on linking to each chapter of MM I wrote as I uploaded it, but the icons were on the dead PC, and by the time I got up to chapter 15 and still hadn't linked to any individual one, I thought it was about time to stop planning and get to doing. Thus, "chapters" 1-18 are now posted as a PDF on my website, and can be accessed by clicking the picture at the right. (It's just over 2Mb, and about 80k words. Should download fairly quickly.)

I am still going to be uploading the individual chapters to the Memento Mori LJ as I go, if anyone is interested in following along from there. Comments/critique/useful nitpickery welcome. :)

Lastly, I have an account on Dreamwidth now. I hope it'll be a fraction more reliable than LJ.
Posted by Abi Scott at 08:03 No comments: